One of the beauties of the Camino, and especially the Camino Frances, is the infrastructure. It’s rare that you are more than 4-6km from the nearest town and somewhere to buy food or fill up on water. There’s no need to be weighed down carrying all your supplies for the day, although it is a common thing for pilgrims to carry food for a picnic lunch somewhere scenic. But the cost of food in Spain is cheap so it’s not a big financial outlay to eat all your meals in restaurants. Here is a summary of the essentials.

One of the beauties of the Camino Frances in particular is the ubiquitous water fountains. Most towns will have one and they run with fresh, drinkable water. If there isn’t a sign there saying “no potable” (non drinkable) then you’re fine to drink it. Some of these fountains date back to the middle ages and have been supplying pilgrims with sustenance for centuries. Not only is it ok to drink it, it’s actually encouraged to get your water supply this way because buying bottled water just makes for a lot of plastic to be disposed of.

If you are walking in winter, be aware that many of the fountains are switched off to avoid the pipes bursting from frozen water. Make sure you have a good water supply to start your day at this time of year. Similarly, the middle section of the Camino, the meseta, can have distances up to 17km without a town so again a good supply is needed to be carried.

Depending on where you’re staying on your walk, breakfast may be supplied for you. Unless you are staying at a higher end hotel, however, breakfast will usually be a basic continental variety with bread, fruit, juice and maybe something like meat cold cuts or cheese. One thing to consider is that most hotels in Spain don’t start serving breakfast till around 8am so if you’re an early riser you may want to ask them if you can get a take away pack.

If you’re not planning on a picnic, restaurant meals for lunch are usually generously portioned, cheap and hearty. “Combinaciones” or “menu del dia” (menu of the day) are the usual fare consisting of a combination of foods that might include eggs, chips, jamon (ham steak), sausages etc.

Like anywhere in the world, there are restaurants to suit most tastes in most of the larger towns. In smaller towns or in albergues and hotels themselves, they will probably have what’s known as a “pilgrims menu”. As the name suggests these meals are specifically designed for walkers and usually consist of a starter, main and dessert accompanied with water and wine, sometimes a whole bottle! The quality can vary but generally they are more than satisfying and some smaller eaters might even share a meal.

Like anywhere, if you want to spend big on food you can still go to fancy restaurants and pay similar costs to back home. But generally speaking, food and drink on the Camino in Spain is very cheap.

If you’re on a shoestring budget you can always go the DIY option. If you’re staying in albergues they usually have kitchens and group meals, where everyone chips in, is a common occurrence. Or you can buy microwave meals for around 2-4 euros. For lunch, baguette bread can be bought for under a euro while you can get packets of salami, ham or cheese starting from 1 euro a packet.

Wine can start from as little as a couple of euro a bottle. Bizarrely, it can be cheaper than water! And while you can’t get cask wine for that price at home, even the cheapest of wines can be surprisingly good! 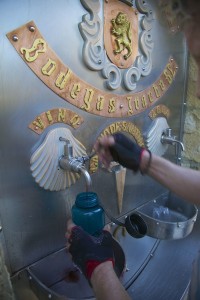 Unfortunately for vegetarians, Spain is very much a meat loving nation. For most Spaniards the concept of not eating meat is just unheard of. Fortunately, with the Camino being so well trodden with foreigners, vegetarian options on menus are becoming more common, especially in the larger towns.

Some ways to prevent you starving might be to buy your own produce and make your own meals, ask for two starters if ordering a pilgrims menu or menu del dia (the main will nearly always include meat),and possibly bring some food supplements like protein bars from home. Spanish omelette will become your best friend as this is served pretty much everywhere. Of course this doesn’t help the vegans!

These are basically the same thing and can be a wonderful alternative. Small portions of various culinary delights, often served on a slice of baguette bread. In many places, these are actually served as complimentary sides when ordering alcohol and depending on your appetite can almost suffice as a meal, depending on how much you have to drink! These are especially popular and prevalent around the start of the Camino, in Pamplona and Burgos.

Ok, so this can be an issue at times. The menus for lunches and dinners can be identical right throughout Spain with few alternatives sometimes. Different regions have different specialties, with Galicia at the end of the Camino particularly well known for such local seafood delicacies as pulpo (boiled octopus) and mejillones el vapor (steamed mussels), while somewhere like Pamplona have meat delicacies like cordero (seasoned lamb).

Overall, the culinary experience in Spain is quite good, if a little repetitive, if you’re a meat eater, with some real gems to be had in different regions. For Spaniards, eating is so much about what you’re eating as who you’re eating with. They can take hours to eat a meal with frequent stops for interesting conversation. It’s an overall experience.