Although cycling is a relatively new way to undertake the Camino de Santiago it is an excellent choice for those who want to experience as much of ‘The Way’  as they can in a  shorter time frame.

Cycling the Camino is an accepted way to complete a Pilgrimage and your credential stamps are as valid as walkers are.

You need to cycle the Camino de Santiago for at least 200km to earn your Compostela when you reach Santiago  – so start from no closer than Ponferrada and once you hit the hills of the Cantabrian mountains you’ll feel you’ve really earned it!

The midsections of the Meseta are especially suited to cycling and it’s hard for walking pilgrims not to feel a twitch of envy as they see cyclists whiz past them on the long roads across the plains. In fact, some people walking the full Camino choose to cycle the sections from Burgos to Leon to cut out this sometimes monotonous walking and feel the freedom of a bike.

For the most part, walkers are happy enough to share the past with cyclists and a cheery ‘Buen Camino’ as you approach is enough to alert them to your presence and for everyone to adjust and make room to pass safely.

In the busier summer months of July and August, the paths will have more walkers on them so if you prefer not to have to slow down for walkers frequently then it’s best to avoid these months. 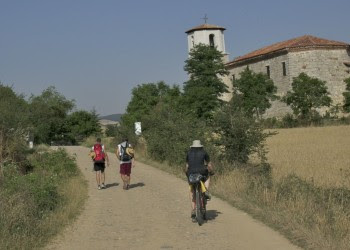 Terrain and types of bikes

When you cycle the Camino de Santiago you’ll experience a mixture of different road surfaces, path and trails. Sometimes you will actually be on a sealed road or highway, at other times you’ll be on a rough off-road track that feels more like mountain biking.

If you want to cycle the Camino then it’s best to use a mountain bike or at least a hybrid as a road bike or touring bike will not handle the rough sections of terrain. People do ride on road bikes but they are on roads the whole time and not necessarily the Camino itself but roads that are nearby and shadow the route. Some people desire to use electric bikes but for the same reasons, they are unsuitable to use on the actual Camino route due to the rough off-road sections that are encountered.

The Camino has hills in many sections along its length and mountains in 3 places: the initial Pyrenees section ( stage 1), and the Montes de Leon soon after Astorga ( stage 24)  and O’Cebreiro (stage 26).

You need to be a fairly fit cyclist to tackle these stages which involve some long uphill climbs of several hundred vertical metres. Also, stages like the Alto Del Perdon and sections between Logrono and Burgos have plenty of smaller climbs. The daily distances that cyclists cover are of course determined by their fitness and the terrain. Most people aim to complete 40 – 60km in a day, while very fit cyclists may aim for 80km or 3 walking stages each day.

You can at least half the time that it takes a walker to complete the Camino or cut it to a third. Hence the growing popularity of cycling for those who perhaps incline more towards experiencing the Camino as an adventure holiday rather than a Pilgrimage.

People cycling the Camino de Santiago are often surprised by how rugged it can be in sections, there will be times when you will need to get off your bike and push if you are following the walkers’ paths, even on a mountain bike it can be hard work in some rural sections. The good news is these usually don’t last for long but you should be prepared for these off-road sections.

One important thing to note for those planning to stay in Albergues: walkers are always given preference over cyclists when it comes to assigning rooms.  The principle being that a cyclist can more quickly pedal onto the next Albergue should the first be full, than a tired walker!

See the BBC article on cycling the Camino

Taking your bike on public transport

If you are taking your own bike to Spain then you should be aware that not all trains will accept bikes on board, you will need to double-check at the time of booking your ticket on RENFE – as some intercity trains do not allow it whereas others do. Here is a guide to the types of trains and which usually allow bikes:   RENFE  runs local (Cercanías), regional (regional), medium distance (media Distancia), long-distance and sleeper trains.

Most of the large cities in Spain have a local train network covering a radius of up to 100km from the city centre. With very few exceptions you can take bicycles on all of the local Cercanías networks and you do not need to buy a ticket in advance. Some trains may have special sections for bicycles, but more typically you just keep them by the doors on the opposite side to the platforms.

Regional trains cover longer distances than the Cercanías trains but tend to stop at most smaller stations. You can take bicycles on these trains and usually do not require a ticket in advance. There is a section at the front of the train where you can store the bikes and, if this is full, most guards are happy for you to keep the bikes by the doors.

Media Distancia is probably the most useful trains for cyclists as they cover relatively long distances. They are quick, often stopping only at major stations, and do allow bikes onboard. It is, however, necessary to obtain a special ticket for your bike which you can do at the station. The ticket is free. Most media Distancia trains have space for three bikes and it is rare for these to be full. If it is full, or you don’t have a ticket for your bike, it is up to the discretion of the guard if he will let you and the bike on board. Most will turn a blind eye, but you may have to stand by your bike for the length of the journey.

Renfe operates several fast trains (AVE, Avant, Civia) which do notallow any bikes onboard. There is not much room to store bikes on these trains so if you did somehow manage to get on, you would be standing with it in an aisle for the journey, not ideal. It is possible to take a bike as luggage on these trains as long as it is secured in a box or bike bag you should have no problem getting it on.

Rules for taking bikes on flights in Spain are the same as elsewhere, it must be properly boxed or bagged with the pedals removed, handlebars turned and seat post off to fit in a box or bag. The main consideration is, of course, the weight – most airlines will have 20kg or less luggage allowance and as an average mountain bike will weigh in at 14-17 kg that usually means you’ll need to purchase additional luggage weight. This should be done in advance of arriving at the airport to avoid any nasty surprises – it’s always cheaper to pre-book additional weight. The cheaper the airline ( i.e. Ryanair, Vueling) the more restrictive the included baggage allowance is so you’ll have to add on more luggage when you book.