One of the reasons attributed to the exponential growth in numbers of people walking the Camino over the past 10 years is the heart warming movie “The Way”, starring Martin Sheen. If you are considering walking the Camino and haven’t seen it yet we highly recommend you do.

While the subject of much debate among Camino purists, the movie is a good introduction to life on the Camino. Like any Hollywood movie, there are anomalies throughout ( eg no one wears jeans walking the Camino, they are often seen walking in the wrong direction etc), but it does manage to capture the spirit of the Camino. And let’s face it, that’s what it’s all about.

For every sceptic of the movie, there’s many more who fall in love with the movie, sometimes to the point of obsession. So for those tragics (you know who you are!) who might want to discover the locations used in the film, here is a synopsis of the main places. Unfortunately some of the major scenes weren’t actually on the Camino at all but used for production reasons. This is in chronological order in the movie.

St jean pied de Port- The start of the Camino Frances. Tom arrives on an old train (they’ve been modernised since) and is met by the police captain. He stays at the Hotel Continental in Central St Jean. But don’t walk over the bridge the captain points out to Tom is the correct way. It’s not!

Goats cheese factory- this is at Calle San Cristobal, Mezkiritz.

Hotel Akerreta- A lovely cassa rurale about 6km past Zubiri and 17km before Pamplona. 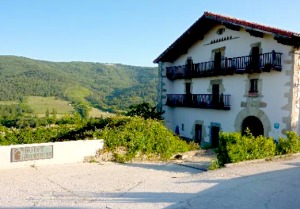 Albergue Orisson- This is a scene where Tom has lunch but Orisson is actually just 8km out of St Jean Pied de Port so it is out of sequence.

The bridge where he drops his backpack- Sorry this is quite a way off the actual Camino. They actually got the local damn open so there would be enough water flowing in the river for the scene.

Pamplona restaurant- This is where Jost calls Tom back to try some cordero and Tom mistakenly asks for tapas instead of pinxos. The restaurant is Caballo Blanco.

Zariquiegui- This is where Jost and Tom meet up with Sarah.

Alto del Perdon- One of the most iconic sites on the whole Camino with it’s iron cut out pilgrims. This is on the day you leave Pamplona.

The albergue where the beds are outside- Sorry, another set up for the movie. No albergue would have outside beds.

El Ramon’s albergue- Not a real albergue but based on an apparent real person who did have one once. The actual house used in the movie is at Calle el Sepulcro 21, Torres del Rio

Police station where he is taken- Logrono. probably best to avloid!

Cafetería Rincón de España, Burgos- This is where Tom’s rucksack is stolen.

Calle Arco de la Villa, Burgos- This is where they are all invited to a street party with the gypsies.

Elvis Bar, Reliegos- Briefly seen with murals on the outside wall. 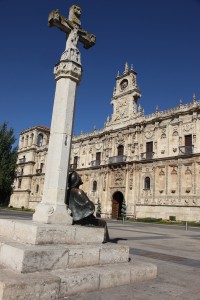 The parador in Leon

Parador San Marcos, Leon-This is where Tom shouts them all to a night of luxury. Unfortunately at time of writing (2020) it’s still undergoing renovations and not open to the public.

Cruz de Ferro- Another iconic Camino site where they lay stones at the foot of the cross.

Santa Maria de Figueiras-  This is where everyone but Jack go into the church and Joost rings the bell.

O Cebreioro- Jack and Tom talking and where Sarah gets ridiculed after saying she’s giving up smoking. They’re actually walking in the wrong direction there.

Santiago cathedral- You can’t actually enter from these steps at the front entrance. It’s only opened in Holy years and was opened specially for the movie.